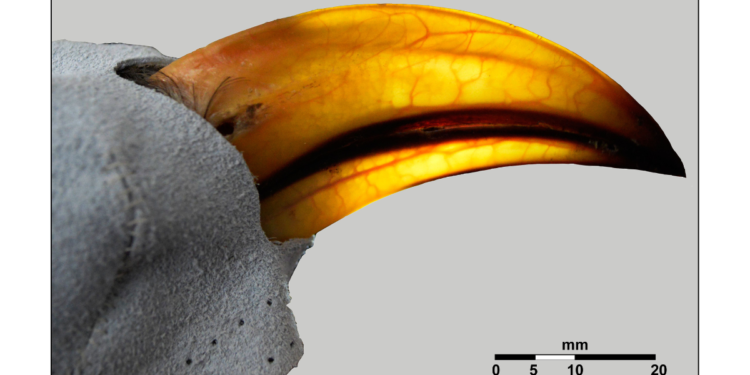 Over the past century, the beak size of the birds studied has increased by about 4% to 10%.

Australian researchers studied 86 species of birds preserved in several museums to measure how their bodies have evolved over the past century in response to global warming. The data provided by the scanners allowed the researchers to demonstrate that the beak size of the birds studied increased by about 4% to 10%.

One of the most astonishing effects of global warming has been occurring for several decades: multiple species of birds around the world are responding to rising temperatures by "metamorphosing", modifying their beaks, legs and other appendages, in a desperate effort to adapt and survive.

Taking a closer look at how nature has equipped birds to achieve this impressive feat of thermoregulation, the beak is one of the most effective parts of the bird's body thermostat. This living, highly vascularized organ, rich in a branched network of blood vessels, can cause more blood to flow to its beak at night, dispersing excess body heat and lowering its temperature to a level more conducive to sleep.

The secrets of avian metamorphosis revealed by 3D technology

In order to achieve the highest level of accuracy, the university contacted Artec 3D's local partner, Objective3D, and chose the Artec Space Spider scanner, a portable metrological quality 3D scanner widely used by researchers and other professionals around the world, with strict requirements for accuracy and resolution.

The traditional method of detecting bird metamorphosis requires the use of digital calipers to calculate the length, width and depth of the birds' beaks. These dimensions are then integrated into an equation that gives researchers the area of a cone the same size as the spout.

"I'm interested in very different birds, from ducks to passerines to raptors... When you study such diverse species, you necessarily encounter very varied forms of beaks. That's why I think 3D scanning is much better suited for this kind of application, because it allows you to digitize the entire organic surface anatomy, without leaving anything out." comments Sara Ryding.

During her scanning days, the researcher goes to different museums with one or more specific species in mind. She finds these species and starts looking for those to scan, depending on the year the specimen was collected, where it was found, etc.

The scanning method is simple: the bird is positioned on its back on a turntable. Then, by slowly rotating the latter, it is scanned by scanning all the essential anatomy of the beak in a single scan. It takes about two minutes to get an ultra-accurate scan, with a myriad of possibilities.

" Space Spider scans every hollow and curve in the anatomy of the beak, allowing the area of the beak to be precisely determined, to the millimetre." Comments Sara.

So far, the study conducted has shown that in the last century alone, the beak size of the birds studied has increased by about 4% to 10%.

Sara Ryding processes scans in Artec Studio software. It only takes him 6 minutes per bird. " My method of processing scans is this: I perform a global recording, then a removal of outliers, followed by a clean merge, which keeps everything, even the tiniest details, with sharpness. After which I apply the texture to make sure I see where the feathers end and where the beak begins. Then I eliminate the superfluous, so as to keep only the spout in the scan. " describes the researcher.

Sara Ryding then uses Artec Studio's measurement tool to quickly obtain linear measurements of the spout, to check the dimensions measured with the digital calipers and then perform an area measurement, which measures the entire area of the spout.

The essential need for 3D scanning for biological research

According to the PhD student, 3D scanning is essential to achieve this goal reliably: "If we want to facilitate our studies, from one researcher to another, it is imperative that we have precise data that is directly comparable. Manual measurements are no longer enough."

For researchers without access to high-performance 3D scanners, Sara Ryding and her team are improving the existing formula (using geometry) to estimate bird beak size, comparing the formula's estimates with accurate measurements of 3D models created with the scanner.

Sara Ryding's study is still ongoing, and involves the addition of additional formulas and the examination of a wider variety of species.