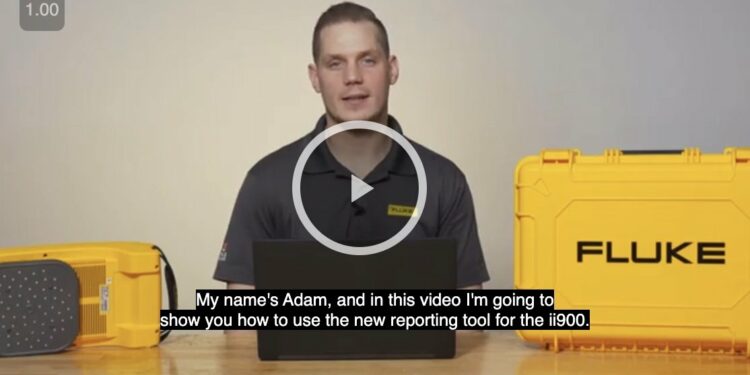 Fluke launched a new CO2 emissions indicator this summer as part of its online reporting tool LeakQ. In addition to estimating the volume and cost of leaks, this new feature adds a third element: estimating CO2 emissions related to electricity consumed in relation to identified leaks.

Maintenance engineers and sustainability managers who work with compressed air and gas distribution systems on a daily basis are not always aware of the exact amount of gas and energy that is wasted due to leaks in the system. For compressed air applications, LeakQ, combined with Fluke's online CO2 emissions calculator, allows users to quantify the financial value and environmental impact of detecting and repairing leaks in the system, generating detailed reports from images captured by the ii900 industrial acoustic imager or Fluke's ii910 precision acoustic imager.

About 90% of processing companies use compressed air for their business, so it is sometimes referred to as the fourth largest networked energy. It has been estimated that in the absence of any maintenance, losses due to leaks in the network can reach 25 to 30 per cent. However, even if it is desirable, it is very unlikely that a plant will be able to eliminate 100% of leaks from its compressed air system.
Air compression is a process that consumes a lot of energy. As such, any leakage in the compressed air system means that a proportion of the electricity used by the compressor to run is actually wasted. Due to the energy-intensive nature of the process and the potential environmental impact of power generation, being able to quantify the environmental and financial value of maintenance can allow companies to significantly reduce their energy consumption – and therefore their costs – as well as their carbon footprint.

Typical leaks to focus on are quick-coupling leaks on non-threaded connections or interfaces, leaks from open ends with large holes or open pipes, leaks from metal threaded fittings or leaks with defective welds, and leaks into rubber or plastic hoses or flexible pipes. Standard leak detection tools only measure dB over a narrow frequency band, but LeakQ automatically scans the entire frequency spectrum, and captures all frequencies generated by the leak. The resulting estimates are thus much more representative of actual leakage than those obtained using traditional measurement tools.

To generate a report and estimate the potential cost of leaks, the user simply transfers the inspection data from the ii900 or ii910 to a PC, from where this data can be transferred to the online LeakQ report generator. The user then enters the operating variables, such as gas type, pressure, kilowatt-hour cost, and system-specific power ratio, which is a measure of compressor efficiency. The generated report will include a summary of all identified leaks, as well as an estimate of individual and annual volumes, costs and emissions. Leak images are also embedded in the report, which can be shared as a PDF or downloaded as a CSV file, to be imported into existing maintenance systems. A feedback option allows users to share their experiences directly with Fluke, so the company can continue to improve the leak detection tool and make it more powerful and easier to use.

Tako Feron, Global Acoustic Imaging Product Manager at Fluke, said: "Being able to prioritize, quantify and quantify leaks in such a simple way is a game changer for maintenance engineers, who can now assess the financial and environmental impact of any leaks in a compressed air system. Being able to reduce electricity consumption is still a major asset, but even more so in the current context of rising energy costs. At the same time, minimising leakage in compressed air systems is essential if we are to achieve our sustainability goals, which are crucially important. »
Tako Feron adds: "It is estimated that around 90% of companies use compressed air in any of their operations and that the majority of this air is generated on site. This means it's up to the user to keep compressed air costs as low as possible, and the LeakQ leak reporting tool is an extremely powerful way to help them with this task. »