How much does the Tasmanian tiger weigh? 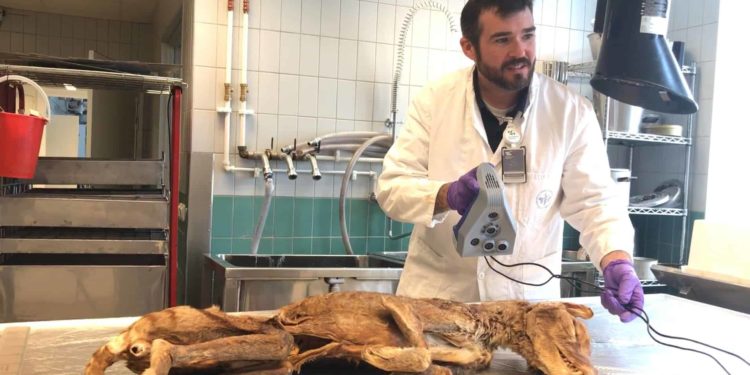 Application cases > The 3D scan elucidates the question of the weight of the Tasmanian tiger, the largest carnivorous marsupial that has existed!

Millions of years of evolution had transformed thylacine, more commonly known as the Tasmanian tiger, into a survival specialist. But the first settlers then arrived, causing the disappearance of the largest existing carnivorous marsupial and leaving many questions. Beginning in the early 1830s and into the next century, thousands of thylacines were deliberately exterminated by farmers and hunters as part of an extensive reward program. Until there is only one left.

The last known thylacine was captured in the wild and spent the last three years of its life in the cage of a zoo. At the time, researchers failed to study it in depth. This missing information includes thylacine's diet, reproductive habits, hunting patterns, how they move, how they interact with their environment, and even their weight.

The weight of the Tasmanian tiger, a question fraught with meaning

Over the decades of thylacine research, several scientists have drawn attention to the lack of an accurate estimate of the animal's body mass. According to an often quoted estimate, thylacines weighed between 25 and 29 kilograms.

Another characteristic of thylacine to be determined was whether or not it was an exception to the so-called "carnivorous diet costs" principle. It is essentially an energy threshold describing how carnivores about 14 kg or lighter tend, by necessity, to feed on prey smaller than them. Carnivores weighing between 14 and 21 kg, such as foxes and feral cats, generally focus on smaller prey, but may occasionally attack heavier animals. And those of about 21 kg or more prey, usually on prey of the same size or larger size.

Aware of this crucial lack of information, Douglass Rovinsky, a doctoral student at the University of Melbourne, and his team tried to unravel this mystery.

Details of the project were published in the scientific journal Proceedings of the Royal Society B, under the title "Didthylacine violate the cost principle of the carnivorous diet? Body mass and sexual dimorphism oftheiconic Australianmarsupial."

Dr. Rovinsky explains the importance of the project: "The more knowledge we have about thylacine, or any other extinct animal, the better we can understand how animals still alive today will respond to environmental changes that are occurring at an alarming rate globally and locally."

In order to digitize the thylacines and analyze their body mass, the team used 3D technologies, including a portable Artec 3D 3D scanner.

Traditional methods have been discarded because they involve constantly manipulating and resting specimens, which can damage them. The Artec Space Spider 3D scanner, which allows accurate data acquisition up to 0.05 mm and is tens of times faster than other methods, and Artec Leo with a built-in touchscreen and 100% wireless, were used.

Subsequently, a work of processing the scans in the Software Artec Studio was carried out.

"The tracking is incredible and allows theuser tomove around objects, and easily scan any surface. Of course, thelackof cables and the built-inscreen makes theentire scanning process much simpler and more efficient. Explains Dr. Rovinsky.

3D technologies set to become the benchmark in biology and paleontology

Once all the data from the body mass calculations (from 207 scans of 93 thylacines) were collected, Dr. Rovinsky and his team determined that the true weight of thylacine was about 19 kg for males and 14 kg for females. Males were 30% larger than females.

Estimates of the body mass of male and female thylacines are about 55% lower than assumptions made decades ago. It was therefore clear that thylacine was not an exception to the "carnivorous diet costs" principle since it belonged to the category of carnivores weighing between 14 and 21 kg and which generally feed on creatures smaller than them but can occasionally prey on larger prey.

This successful project is part of a broader research on the evolutionary biology of thylacine, which includes the present study of its body mass and expands on further research into its diet, locomotion, and biology as a whole using 3D data samples collected from around the world.

"Paleontologists are finally realizing that methods that are attractive to 3D technologies systematically provide a much more accurate estimate of body mass. They represent the future in research," concludes Dr. Rovinsky.

Alphanov, finalist of the Prism Awards

Corrosion: theme of the next regional technical day of the Brittany Pays de Loire regional committee of Cofrend

Corrosion: theme of the next regional technical day of the Brittany Pays de Loire regional committee of Cofrend