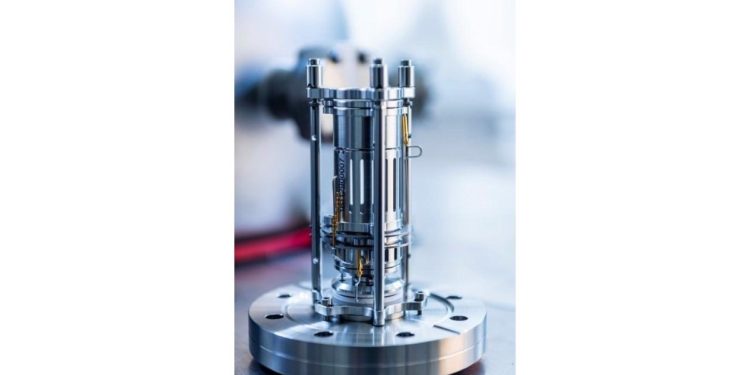 As part of the European IonGauge project, the LNE participated in the development of a new prototype ionization gauge allowing very low pressure measurements at unmatched accuracy. This work is published in the reference journal Vacuum.

To measure very low pressure (ultravide), especially in research in basic physics, metrology or in the semiconductor industry, ionization gauges are used. This ionization results from the collision of the electron beam emitted by the cathode of the gauge and then accelerated, with the molecules of the gas measured. The current of ions collected is proportional to the density of the gas and therefore to its pressure.

However, the control of the sensitivity of these instruments, mainly related to the relationship between gas pressure and the current collected, is currently unsatisfactory. Sensitivity depends on the geometry of the gauge used, the pressure to be measured and the gas considered, and also lacks stability over time.

To remedy this problem, the European IonGauge1project, bringing together the LNE, several European metrology laboratories2 and industrial partners, aimed to develop a new standardized ionisation gauge model with improved metrological characteristics that could serve as a reliable benchmark.

Compared to existing ionization gauges, this new model has the advantage that the length of the electronic path is well defined. In particular, electrons do not collide with the anode from which they can be reflected, generate secondary electrons or cause the desorption of neutrons or ions. The design, validated by numerical simulations, has the advantage that the manufacture of the gauge by different manufacturers would give copies with not only a predictable sensitivity (and therefore reproducible) for a large number of gases, but also good stability in the long term. This type of gauge would then be particularly suitable as a benchmark in the range of 10 -6 Pa to 10 -2 Pa for calibration of vacuum manometers or quadripolar mass spectrometers.

In particular, the ESA participated in the characterization of several prototypes of ionization gauges carried out according to these new requirements, as well as in a comparison between three national metrology laboratories. The result is a 1% controlled sensitivity for a given copy and a reproducibility between copies of the order of 2.5%, slightly above expectations. This will ensure an unmatched accuracy of pressure measurements in the range between 10 -6 Pa and 10 -2 Pa.

This new ionization gauge can easily be replicated by any experienced manufacturer and will provide greater measurement accuracy to demanding users of the very low pressure field.