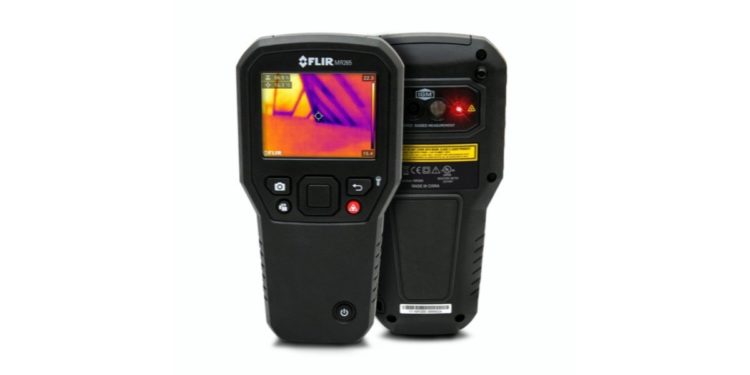 Designed to visually analyze large surfaces for moisture issues, air leaks, electrical malfunctions, and more, the Flir MR265 moisture meter/thermal camera combination with MSX* function allows professionals to quickly identify and locate water leaks and other moisture problems at the source. Consisting of a thermal camera and a measuring instrument, this tool combines a Lepton thermal camera with a resolution of 160 × 120 pixels, an assisted camera with an LED lamp and a laser pointer, and measurement features with or without a probe, to speed up the identification of moisture problems, to which is added a simple reporting function via Flir Thermal Studio Suite.

Diagnosticians, craftsmen and other building professionals, wishing to complete their range of tools, will appreciate the many possibilities offered by the MR265 to read and report humidity levels, as well as to identify thermal anomalies, which may indicate problems with leaks in pipes, electrical malfunctions or heat loss in doors and windows.

Compared to traditional non-thermal imaging moisture meters, the MR265 significantly reduces inspection time. Thanks to its 2-megapixel visible camera that allows it, via the MSX function, to superimpose the details of the contours on the thermal image, the MR265 provides the user with much more detail and context on the screen and on the recorded images, for quick and efficient identification of problems.

Humidity measurement with and without probe

The MR265 also makes it easy to identify moisture problems thanks to its measurement functions with and without probe. The probe-free option provides qualitative measurements using a built-in sensor, for situations where a more invasive method is unthinkable or would lead to unwanted damage. Conversely, probe measurements produce quantifiable results via a resistive spike probe, which can pierce cavities and other suspicious points of moisture in walls, ceilings and floors. When the probe is used with the thermal imaging camera, the operator can quickly scan the entire surface of a wall and then use the built-in sensor to locate moisture more accurately, thus measuring the exact level of humidity without unnecessary damage. Functionality can be further extended using six compatible sensors and probes for the MR265, such as the Flir MR08 hammer, the combined hammer and wall cavity probe, and the Flir MR05 tip probe.

The simplified reporting features provided by Flir Thermal Studio Suite also help reduce the time it takes to complete diagnostics and reports. Users can directly download thermal images in JPEG format by connecting the supplied USB cable to Flir Thermal Studio or a compatible reporting solution. They can also create reports based on thermal, MSX or visible images, or pre- and post-intervention status reports that contain all three types of images using Flir software. This makes it easier for users to communicate about pre- and post-repair activities, and to reassure themselves that mold problems, electrical anomalies or energy losses have been identified and resolved.

"The MR265 is a great tool because it can read humidity levels in many different ways. In addition, the built-in thermal camera with laser function allows me to detect thermal anomalies in circuit breakers even faster. It doesn't take up much space, so I can easily slip it into my bag. This tool is versatile, and saves me from carrying all kinds of other instruments. It complements my inspection tools perfectly,"says Terry Meyer, Building Inspector, Metro Home Inspections.