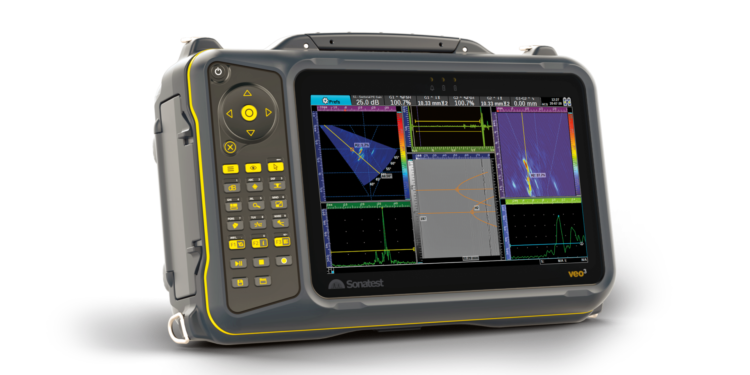 A few months after the launch of its new VEO 3 Multi-Element platform, Sofranel is very proud to announce a software update bringing a major innovation. Indeed, Sonatest offers for the first time a new type of imaging called TFMi, understand Total Focusing Methodes Intermodes. It is simply a matter of using the already well-known TFM imaging but by merging several reconstruction modes, which makes this imaging method more accessible and reliable. Today all the devices on the market offering TFM display either a single reconstruction mode, or several side-by-side modes, but none of them offers to merge these different images to simplify the interpretation. This merger also reduces the risk of error in the choice of reconstruction modes.

How did you come up with this idea?

We are always used to working closely with our customers to understand their needs, their difficulties in their daily tasks. Thus, by carrying out field inspections, analyzing the images obtained on site, and discussing with several experts, we had the idea of testing this possibility and the first tests carried out with a beta version showed that the results were very promising and even exceeded our expectations.

What does this revolution consist of?

This new TFMi approach that we propose today, combines several TFM images. The amplitude values of each pixel are compared and a single image is reconstructed using an algorithm. This significantly improves the signal-to-noise ratio (SNR), but also the reliability of defect detection and characterization. Coherent signals are amplified, so high amplitude responses are enhanced. In the same way, inconsistent signals are suppressed, which significantly reduces background noise.

Did this require a lot of development efforts?

Of course, the introduction of a new imaging method always requires significant resources. Nevertheless, the technological choices that had been made during the design of the VEO 3 platform, namely the use of high-end components and processors and the implementation of a high-performance software architecture favoring speed and real-time response, allowed us to implement this method quite easily. The fact that the VEO 3 is in its foundations a powerful and powerful electronics has greatly helped us to achieve this goal and this result.

What are the benefits for your customers?

First of all, the VEO 3 allows for simultaneous multi-element inspection and one or more TFM inspections, which is already a clear improvement over many current devices. Secondly, the fusion of TFM images makes it possible to better reproduce the dimensions and typology of a defect in a room. The benefits are:

Today it is commonly accepted that TFM inspections account for barely 5-10% of inspections. Several reasons for this, the main one being that given the complexity and risks associated with the TFM method itself, the vast majority of inspections are limited to the simplest mode, namely the LL mode. With this innovation that simplifies and reduces risks, we hope that the method will be more widely used, either for more complex inspections or expertise, or by new users who are currently reluctant to venture into this method. It is obvious to us that the TFM is not going to replace all conventional or even multi-element US controls. It must be remembered that TFM will never be as fast as a multi-element control and that above all it is an image processing method and not a method based on physical phenomena as is the traditional Phased Array. So there are fundamental differences that make TFM not a miraculous method that will upset everything.

What about codes, standardization?

This is a real topic. TfM is beginning to appear in some procedures and draft standards are being studied. We strongly hope to bring our contribution to the work of the experts through this major innovation.

What conclusions for the Sofranel group?

We are very much looking forward and excited about this evolution. This is part of our research and development policy to innovate on ultrasonic devices. You will notice that a little more than a year after the launch of the WAVE which marked the spirits and which meets a great commercial success, we are now bringing our stone to the edifice of Advanced Techniques for Ultrasonic Inspections.

Example of the interest of TFMi on a cluster of porosities