Precia Molen announces the opening of its third plant in Chennai, India 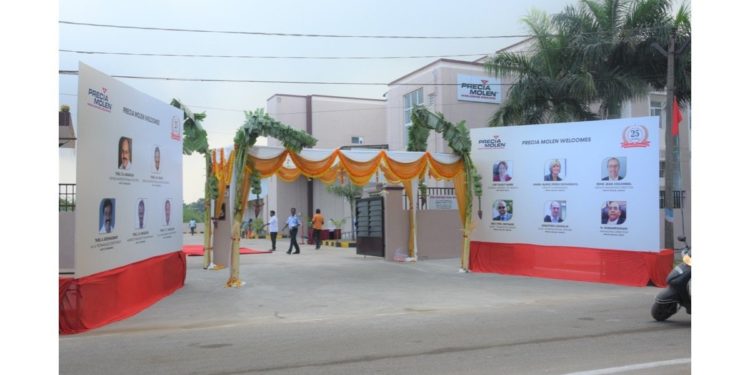 Precia Molen, a global specialist in industrial and commercial weighing, continues to expand its international activities with the opening of a third factory in India in Chennai (Madras), India's fourth largest city.

Located in front of the two current factories, this new building was inaugurated on December 9 by parliamentarians and members of the Indian government of the Tamilnadu region, Lise Talbot Barré, Consul General of France in Pondicherry and Chennai. Anne-Marie Escharavil, President of the Group and René Colombel, Chairman of the Management Board of Precia Molen France followed the event remotely from the headquarters in Veyras.

This third site aims to double Precia Molen's production capacity for the Indian market, the Middle East and Asia Pacific.

Building on its development in India since 1995 with more than 60,000 projects and the opening of two manufacturing plants in 2015 and 2017, the Indian subsidiary of Precia Molen, which now employs 130 people, has increased its turnover eightfold since its acquisition in 2008, particularly in the agri-food, pharmaceutical and chemical sectors.

According to the company, Precia Molen India has become in a few years the market leader in industrial weighing in India with many establishments on the Indian territory and in particular in Chennai, New Delhi, Mumbai, Baroda, Calcutta, Hyderabad, Bangalore (...) and many references in Indian and international industrial groups.

Beyond its local roots, recently reinforced by numerous job creations to support the development of its activities, Precia Molen is a solidarity player in India. The management of PM India and all its employees have mobilized to help local populations following the floods that particularly affected the Tamil Nadu region a few months ago. More recently, PM India has also provided valuable assistance by financing the Covid vaccination of Precia Molen employees but also employees of other companies located in the same industrial area.

In April 2021 during an exceptional solidarity operation in support of the Indian people, hard hit by the Covid-19 pandemic, PM India was keen to support the provision of medical equipment to sustainably strengthen the capacities of Indian hospitals during the pandemic crisis, as part of the action coordinated by the Crisis and Support Centre of the Ministry of Europe and Foreign Affairs and implemented by the Embassy of France in India.

"We are proud to open our third production site in India to support the strong growth of our subsidiary. This new plant allows us to double our local production capacity and allows us to respond to the significant development of our commercial activity in India and export in Southeast Asia, the Middle East and Asia Pacific,"comments René Colombel, Chairman of the Executive Board of Precia Molen.