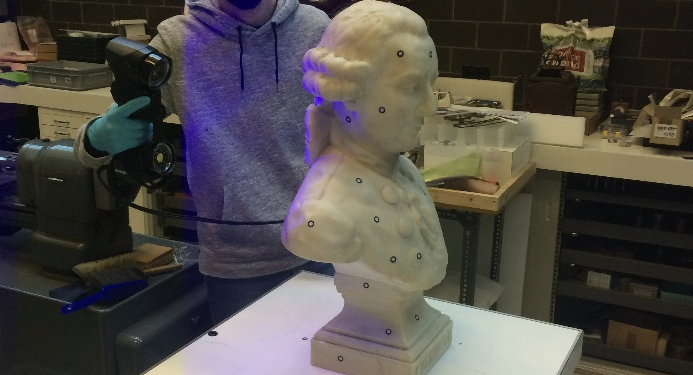 For several years, the Education component has been one of Creaform's priorities. For us, there is no doubt that teachers as well as researchers must be able to access the latest 3D measurement technologies, with the aim of properly training the next generations of engineers and designers.

It is with this in mind that Creaform has, in 2021, started a collaboration with the Technology and Industry Pole (IT Pole), a technical training center in the Neuchâtel region of Switzerland.

What the school does

Training in mechanics, computer science, automation, automotive mechanics, microtechnology and watchmaking are provided on the Loclois site – a specialization that lies at the heart of Switzerland's heritage.

The IT division is part of the Neuchâtel professional centre active in fields as diverse as commerce, health, construction and applied arts.

In April 2021, the IT division's prototyping center acquired a HandySCAN 3D scanner| Black Series. At that time, the school had never worked with 3D technologies and faced different challenges: the IT division wanted to teach reverse engineering and could perform the latter in 2D but not in 3D, for example.

Following the acquisition of the 3D scanner, the theory master (teacher) Mr. Damien Grob was able to test the 3D scanner in self-taught mode, using the support of a Creaform application engineer.

Then in June, IT workers received a formal one-week training to "acquire the right reflexes and better understand the settings of the device," Grob explained. Throughout the process, the IT division felt well supported by the Creaform team, who provided regular monitoring, information and advice.

In order to obtain quality STL files, the IT division also used Creaform VXmodel software. VXmodel is a post-processing module to optimize meshes and prepare 3D scans for another application, such as 3D printing.

The integration of the 3D scanning project into a diploma work

At the time of the acquisition of HandySCAN, Yoan Jeanfavre was a student at the IT pole, candidate for a diploma of Technician ES in Microtechnology, in option Design and Industrialization.

Having shown a keen interest in the 3D scanning project, Mr. Jeanfavre was mandated to carry it out. So he not only followed the training with Creaform but he also carried out several small scanning jobs with the HandySCAN 3D| Black Series to better target its features.

This work, as well as the writing of a report containing parameters and recommendations, was integrated as a diploma work for Mr. Jeanfavre, who was "very motivated by the use of this equipment with futuristic aspects."

An application case: the scan of the bust of a famous watchmaker

To better familiarize himself with 3D measurement technologies, Mr. Jeanfavre has digitized the bust of Ferdinand Berthoud, an 18th century Swiss watchmaker and chronometerian considered one of the greatest of all time. The bust in question, carved in white marble and with a height of about 75 cm, is in the International Museum of Watchmaking of La Chaux-de-Fonds, located in the Canton of Neuchâtel.

After the scan, Mr. Jeanfavre created an STL file, using VX-Scan and VX-Model. He explained that "this work has demonstrated the power of this 3D scanner and the possibilities it can offer. The result is simply impressive: some virtually invisible details on the sculpture appear very clearly on the scanned model," he added. IT stakeholders particularly appreciated the fact that handySCAN 3D| Black Series is also efficient in the case of an object "with relatively complex shapes, having reflective surfaces".

From the resulting file, the IT department now plans to make a 3D print of the bust. It is possible to imagine that Mr. Berthoud himself, since he was known for his rigor and his character as a scientific engineer, would surely have fully appreciated this cutting-edge technological project!

HandySCAN applications| Black Series for the IT division

Following this positive experience, the IT division wishes to continue the training of its students in 3D scanning and develop applications in the field of prototyping, such as 3D printing, CAD/CAM and CNC machining.

For the technical school, the HandySCAN 3D "has opened new paths to work that was previously impossible to carry out".