7 award-winning innovations at the 2014 Mechatronics Awards 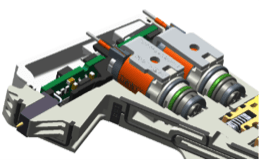 The 2014 Mechatronics Awards were awarded to:

POLYTECH Annecy-Chambery and ENSIAME (Valenciennes), awarded respectively for an electric-generation microturbine and a camera steering arm.

KUKA, for the IIWA robot that foreshadows a new approach to industrial robotics and presents a quality mecatronic at the service of the robot that also incorporates a real design approach.

The Naval Training Centre in Saint-Madrier (Toulon - France) which proposes to train to fly all the systems of a frigate while remaining ashore. Probably the most successful training module since the creation of the Mechatronics Awards: it offers the possibility to zoom from the highest level (ship) to the thinest subset and its technical record.

CARMAT SAS for the artificial heart which is both a technological feat and a life-old work for Professor Carpentier.

PSA for hybrid air or how to rethink otherwise the hybridization of vehicles using, not electricity, but nitrogen under pressure.

RB3D, an SME that since its inception has revolutionized mecatronics with cobotics (robots that assist human efforts and limit musculoskeletal disorders). It becomes the most awarded company at the Mechatronics Awards, proof that this former young start-up has found its market by bringing products with high added value: essential products of the factory of the future.

An exceptional trophy is awarded to Bruno BONNELL for his exceptional involvement in the development of robotics in France. But also for his strategic vision of the domain symbolized by his book "Viva la Robolution" published in 2010, when few people still talked about this mutation.

Enova 2014: the nominees for the Innovation Trophies are ...

Enova 2014: The nominees for the Innovation Awards are...