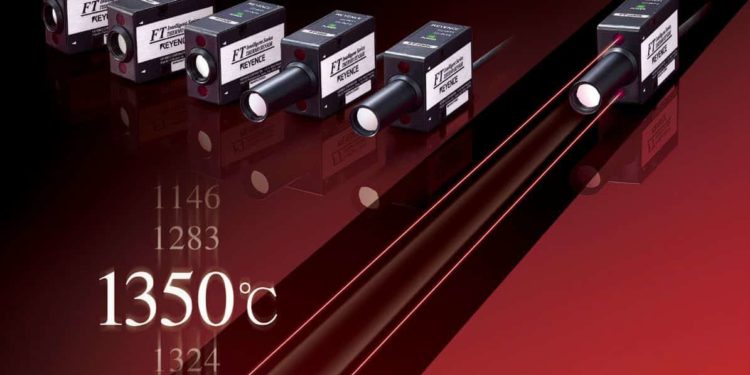 Keyence's FT (flash thermo) sensors quickly detect contactless surface temperature on production lines in a wide variety of applications. They offer very high stability, and above all, the fastest response time on the market (15ms). Keyence's FT series is enriched with 6 new models, 4 for low to medium temperatures of 0 to 500 degrees Celsius and declined according to range (fine, medium, long and ultra-long) and 2 for high temperatures of 0 to 1350 degrees Celsius (medium and ultra-long range). These new models expand the variety of temperature management applications on FT sensor production lines. They are used, for example, for pressure casting, forging and brazing at temperatures above 1000oC, as well as for the shaping of glass or glue point detections on packaging. Several cases are offered to meet different types of environment, even difficult ones.

Keyence has significantly reduced the response time of the thermopile responsible for detecting temperatures within the new FT Series, on the one hand by refining as much as possible the resonance film of the far infrared and on the other hand, by positioning the thermocouples in a geometrically logical configuration, thus allowing to detect the heat absorbed with speed and precision. These new sensors offer a response time of 15 ms, which is ten times faster than competing sensors of the same class for high speeds.

One of the most important features of the FT series is its stability. Indeed, the stable display of temperatures, even in case of change in conditions, is guaranteed thanks to an IPC circuit (integrated protection circuit) that Keyence has specifically developed for this purpose and which carries out an in-house medium. The sensor does not measure instant values, but calculates an average over a period of time. Keyence has also developed a new floating structure: the cylindrical case that contains the detection component is suspended inside the sensor head. A thermal buffer zone is created between the detection component and the ambient air, reducing the sensor size by 5 times compared to conventional models.

The compactness of the models makes it much easier to install the sensors, as well as the two laser pointers that clearly indicate the field of detection. In addition, the FT series has the advantage of being calibrated with a simple button, as complex configuration calculations are now automatic. Previously, the emissivity of the object to be detected had to be pre-set to obtain the correct temperature, this characteristic differing depending on the material. On the FT Series, the user simply enters the current temperature of the object and then the emissivity is automatically calculated from the input temperature. This function is accompanied by an accessory: on low-emissivity objects, it is possible to use a black ribbon body to calibrate the device and stabilize detection.