A successful year for Endress + Hauser 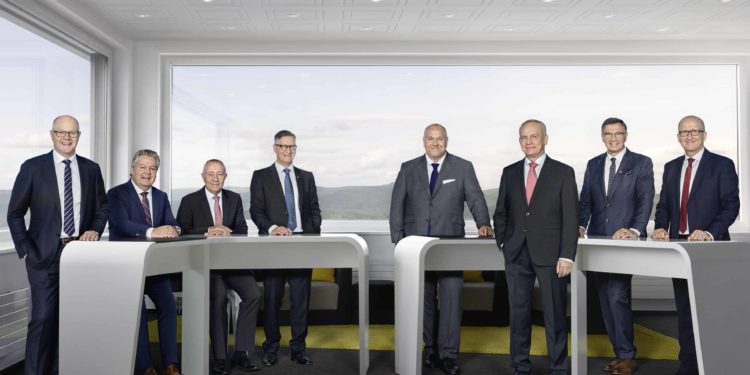 In 2017, Endress-Hauser saw its sales and profits increase. The group benefited from a better economic situation in its sector and opened up new opportunities with a multitude of new developments, including the first digital services. A large number of new positions, high investments and significant progress in sustainability underline the group's balanced growth.

In 2017, net sales rose to 2.241 billion euros, an increase of 4.8%. The rise of the euro against most currencies, however, distorts the picture. "In local currencies, we recorded growth of 6.5% and, in the field of instrumentation, 8.0%,"explained CEO Matthias Altendorf at the press conference presenting the group's balance sheet in Basel. We are convinced that Endress-Hauser has strengthened its market position. »

Development that is based on a solid foundation

In 2017, high household consumption, stabilizing oil prices and low interest rates have led to a resumption of investment in the process industry. "Companies need to develop their capabilities and want to produce competitively, safely and environmentally," said Matthias Altendorf. As one of the world's leading providers of process and laboratory measurement instrumentation, automation solutions and service delivery, Endress-Hauser supports them in this regard.

"We have performed well in virtually every region and every industry," said Matthias Altendorf. China and the United States, two of the three largest markets, have experienced dynamic growth; in Germany, the number one, the turnover at the end of the year was still somewhat behind the rising order book. Good development has been based on a broad base encompassing different sectors. The oil and gas industry has also again contributed to growth. The energy and power plant sector has developed primarily in the field of renewable energy.

Impulses from innovation and digitalisation

Technical innovation has given our activities strong impetus. Last year, Endress-Hauser launched 57 new products and 571 device options. Spending on research and development increased to 170.7 million euros, equivalent to 7.6% of sales. A total of 261 first patent filings worldwide attest to the place of innovation within the group; The portfolio now has 7479 patents and industrial property titles.

Digitalization plays an increasingly important role. "Our customers understood that the Industrial Internet of Things was changing the value chain,"explained Matthias Altendorf. The new transparency optimizes processes and becomes more efficient. The concepts for Industry 4.0 are taking concrete shape. Endress-Hauser, for example, has launched a first digital service for the analysis and management of the installed base of devices.

Three corporate buyouts consolidate the group's offer in the areas of measurement and analysis of the parameters influencing quality. SensAction systems measure concentrations in liquids, IMKO Micromodultechnik sensors detect moisture in solids. Blue Ocean Nova's technology allows spectroscopic processes to be integrated directly into the production process. In the field of laboratories, Analytik Jena focuses even more on its core business, bioanalytical instruments and systems.

Endress-Hauser improved its operating income (EBIT) by 15.0% to 251.7 million euros. Despite the high costs of foreign exchange risk hedging, pre-tax income (EBT) increased due to exceptional effects resulting from the sale of a 24.9% stake to EUR 275.6 million.

Earnings after tax rose 34.2% to EUR 209.1 million. The effective tax rate fell significantly from the previous year, by 24.1%, due to a change in the composition of profits at the local level. "We are a good taxpayer,"said Matthias Altendorf, "it is part of our societal responsibility."

The Operating Profitability Rate (ER) increased by 2 points to 12.3%. The capital ratio decreased by 0.3 percentage points to 70.2% due to exchange rates. As a result of the change in the principles of balance sheeting, it is generally 2 to 3 percentage points lower than in previous years. The group is nevertheless very financially sound and can practically do without bank loans. "We finance investments, buyouts and dividends on our own," said Luc Schultheiss, The Group's Chief Financial Officer.

Endress-Hauser has invested 138.7 million euros worldwide. The third Chinese factory was established in Suzhou; it offers additional production capacity for flow, temperature and analysis instruments. It also houses the largest and most modern flow meter calibration bench in the world. The Belgian marketing company's new building shows how deeply ingrained the concept of sustainability is: this modern building offers a useful surface twice as high for twice the energy consumption.

A good mark on sustainability

"As a family business, we want to grow in a sustainable way," said CEO Matthias Altendorf. EcoVadis' annual supplier sustainability assessment is a strategic indicator of efforts in this direction. In 2017, Endress-Hauser scored 66 out of 100 points, placing it among the top 2% of companies rated.

Last year, Endress-Hauser created 296 new jobs, a significantly higher number than expected. At the end of 2017, a total of 13,299 people worked for the group worldwide. These job openings linked to increasing demand took place primarily in the fields of production and after-sales service. The two flow-meter production centres in Reinach (Switzerland) and Cernay (France) created the largest number of jobs.

Good outlook for the current year

Endress-Hauser started the year with a sharp increase in the order backlog. The group wants to increase its turnover by several percentage points to a figure and expects a constant profitability in the absence of exceptional effects. It is planned to invest 223 million euros and create up to 500 new jobs worldwide. "At the moment, order inflows are exceeding our target,"said Matthias Altendorf. We expect 2018 to be a good year again for Endress-Hauser »