IMTS 2018 exceeds all its records 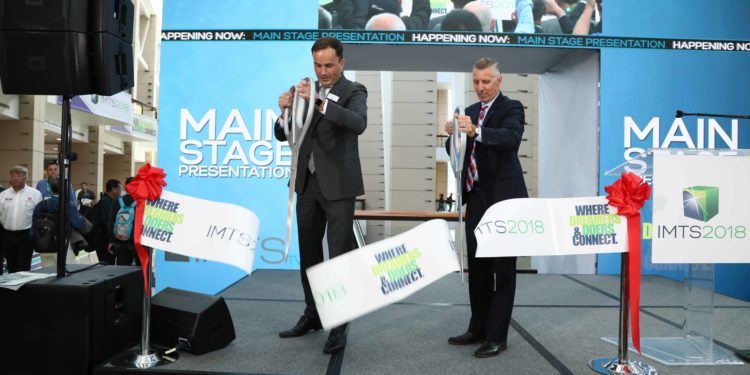 Notable growth areas for IMTS 2018 included the Additive Manufacturing Pavilion, which brought together 51 exhibitors, a strong partnership with Hannover Messe USA and its four co-located trade shows with 510 exhibitors.

"IMTS has seen an unprecedented degree of collaboration between exhibitors to develop additive manufacturing, automation and connected systems," says Eelman. For example, he mentions the operation between 3D Systems and GF Machining, with its DMP Factory 500 3D metal printing system unveiled to the public on the first day of the show.

Scott Harms, founder and president of MetalQuest Unlimited, has been attending IMTS since 1996. After three days at the show, he was working on quotes for a loading/unloading robot, a workshop CMM with an automation package, planning software and intelligent factory technology "There are so many ways to adapt automation that can make our operation more efficient, and they're all present at IMTS 2018,"says Scott Harms, who came with a team of 11 people. We spent more time at the show this year and it's still not enough. Technology is at its highest level. »

"The machines you see at IMTS 2018 are evolving at the speed of digital technology. They're capable of taking files and creating something you've imagined," says John B. Rogers, Jr., CEO and co-founder of LM Industries. The slogan of IMTS 2018 says it best: "Where dreams and reality meet". That's why we started a vehicle manufacturing company like Local Motors, where we could think about it, print them out and deploy them. Olli, the 3D-printed standalone shuttle, has provided more than 1,400 trips to IMTS 2018.

With digital technology, the pace of change makes it difficult to understand the possibilities. IMTS 2018 addressed this issue directly with AMT's Emerging Technology Centre (ETC) on digital transformation, which included demonstrations of the impact of new science on manufacturing.
The 2018 IMTS will be considered the year of digital transformation, as evidenced by an automated cell connecting a Hurco CNC, a Universal Robot arm and a Coordinate Measuring Machine Hexagon using the MTConnect standard.

"MTConnect is the cornerstone of intelligent systems and decision-making based on data rather than instinct," Eelman says. Instead of asking, "What is a connected system?", visitors now tell exhibitors, "Your systems use MTConnect, right?" ».
Paul Gray, Hurco's Director of Research and Development, notes that the only connection required between the machines is an Ethernet cable. "Simple connectivity and software communication overcome a major obstacle for workshops that focus on high-mix, low-volume and even custom parts," he explains.

"Additive manufacturing is one of the most revolutionary technologies ever introduced at IMTS, and this is reflected in the Emerging Technologies Center, which focuses on additive manufacturing," says Eelman.
To show its speed and versatility, Oak Ridge National Laboratory created a "one-day matrix" demonstration that included four stages of development: the printing of the matrix at Lincoln Electric, the machining of the printed matrix at Mazak, the molding of part of the matrix at IACMI, and the 3D laser printing of the piece at Vision Quality International.

"Traditionally, it takes at least six weeks to make molds, and it costs tens of thousands of dollars,"said Lonnie Love, group leader in robotics and automation at the Oak Ridge National Laboratory. Every day we demonstrate the ability to move from digital to real-world production in less than 10 hours. This technology has practical uses that manufacturers can use now. »

More than any other technology at IMTS, additive manufacturing represents an opportunity for small businesses and start-ups, both American and foreign, to make themselves known to a wide audience and develop their dreams.