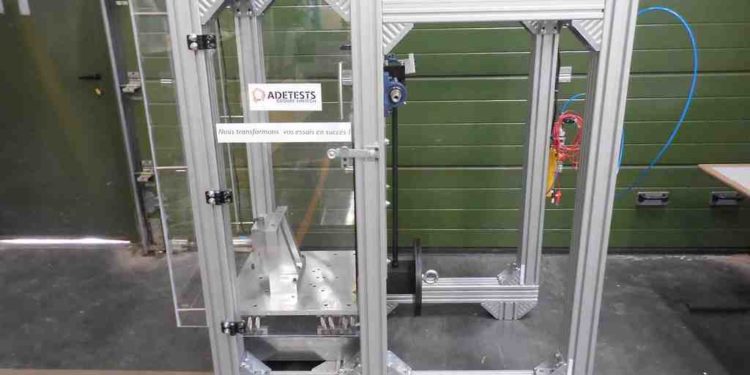 Pyrotechnic shocks caused, for example, by gunfire, the departure of a missile or the separation of the headgear of a space launcher are complex wave forms. Their reproducibility in the laboratory requires a lot of exchanges with the applicant beforehand in order to prepare the tests as best as possible and thus to get closer to the real conditions. The Adetests laboratory, An Emitech Group, proposes to respond to the need to simulate pyrotechnic shocks by means of metal-metal impact on shock benches either pendulum or guided free fall type. The specified levels and equipment mass generally direct the tests to one type of bench over the other. In addition, a questioning of the influence of zero or no speed at the time of impact is necessary. For pyrotechnic shock simulation, the time signal as specification alone is not enough. A frequency measurement is also used to compare actual measurements with tests conducted, the Shock Response Spectrum (SRC), a mathematical model originally developed to characterize earthquakes. The SRC is the benchmark for the MIL-STD810G military standard for defining specifications. The SRC of a metal-metal shock is close to that of a pyrotechnic shock.

With knowledge of the properties of a suspension and the entry SRC, the exit SRC can be simulated by rigidly attaching the equipment to the impact bank. After receiving the specified SRC Adetests sends an initial proposal from a SRC covering the specification. The laboratory then performs the binding tools and the CRS measurements at the TSE fasteners, and proposes the results to its client. Once the proposed CRSs have been validated, the testing campaign is implemented.

How can you optimize your calibrations and audits while maintaining the same level of confidence?

A camera to assist the man on the assembly lines

A camera to assist the man on the assembly lines