Sematec Métrologie opens its doors and presents its new tomograph 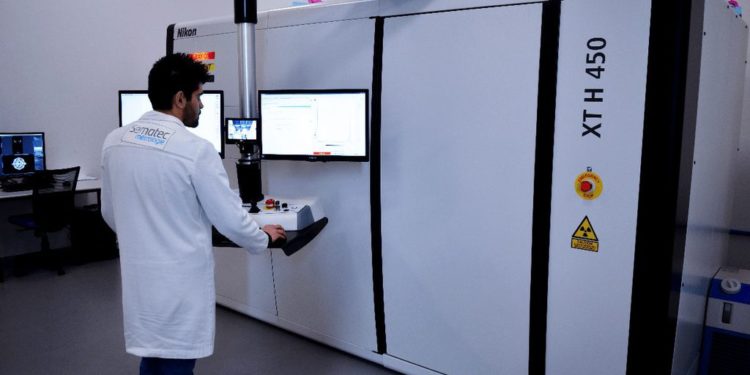 Dimensional measurement service provider, specialist in 3D control of parts of all sizes for more than 30 years, Sematec Métrologie has six state-of-the-art laboratories and operates everywhere in France as quickly as possible to optimize the production of its customers.

The company opens the doors of its Taverny site on June 13. On this occasion, it will notably present its new Nikon XTH450 tomograph.

Objective: to inspect the various parts - up to dimensions of 400 mm in diameter by 600 mm high - with an accuracy ranging from 10 to 20 μm and a resolution ranging from 30 to 400 μm, but also to propose possibilities of assembly visualization of several parts, as well as a rendering of non-destructive dimensional measurements.

“The previous tomographs that we made available to our customers were particularly efficient. However, when we were dealing with heavy steel parts, we got stuck. With this new tomograph, we have the possibility of crossing this type of part up to several tens of millimeters, explains Jean-Noël Bietrix, General Manager of Sematec Métrologie. We are particularly proud to be able to offer our customers a tomography offer offering such high densities. This is indeed unique to a metrology service provider, and generally the prerogative of large manufacturers and large producers of parts. "

At the end of the tests carried out, Sematec Métrologie is able to provide its customers with two visual and precise results reports from the Nikon XTH450. The first is a document explaining the anomalies noted; the second includes the tomography files previously processed according to the client's needs. Thus, the company's customers have the elements that will allow the characteristics of the tested part to be compared with the theoretical ones.

Visual analysis is not neglected since it allows the client company to be able to quickly see the points for improvement. The searches are included in a 3D viewer provided, and the defects found between the "theoretical" version and the manufactured version are clearly represented by a clear highlighting through the colors representing the dimensional defect (s).

Determine the acoustic signature of a submarine in bilge

A portable LIBS analyzer for carbon control in alloys and welds

A portable LIBS analyzer for carbon control in alloys and welds