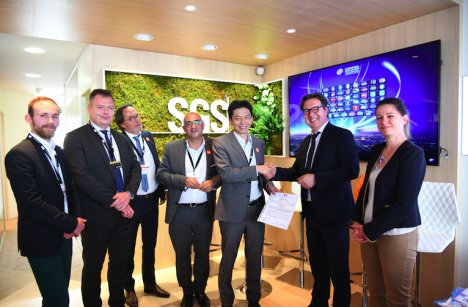 SGS Aeronautics, SGS's Aerospace Division, which specializes in inspection, control, analysis and certification, was awarded TCCA accreditation at the International Air and Space Show (SIAE) held at Le Bourget from June 17 to 21, 2019.
SGS will be able to deploy its aircraft maintenance offering in the area of non-destructive control (MRO for Maintenance, Repair and Overhaul) in Canada.
This approval is in addition to the Part145 already received in 2017 for Europe and the Middle East.
The group also took advantage of its presence at SIAE to unveil its strategy of deployment to major international airports (London, Paris, Madrid, Addis Ababa, Casablanca, Dubai, New York, Vancouver, Orlando, Rio, etc.), with the underlying idea of limiting response times on immobilized aircraft.
An article will detail the strategy of SGS Aeronautics in the next issue of Contrôles Essais Mesures scheduled for release in September.

A fully automated turntable for 3D scanning of small objects

Member of micronora's board for more than 20 years, Michel Froelicher was the organizer of Zoom, Micronora's flagship animation that revealed dozens of innovations in the field of...