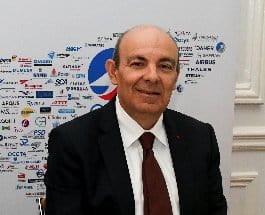 At the end of the regular general meeting of the French Aerospace and Space Industries Group (Gifas), held on 4 July, Éric Trappier, CEO of Dassault Aviation, was re-elected president of the group.
In his speech, he recalled the strong performance of the aeronautics and space sector, the largest contributor to the national trade balance, which achieved 65.4 billion euros in sales in 2018 (up 1.2%), with 77% of civil activity and exports accounting for 85% of consolidated sales.
Éric Trappier also welcomed the good results of the last edition of the Paris Air Show 2019 which was a commercial success with $140 billion of orders announced: "This 53rd edition is a good vintage because this show was a great success, recognized as such unanimously, in all areas. There were more than 316,000 visitors, including nearly 180,000 during the public days, with a beautiful air show. These days, I particularly want to do it. They are central to fostering vocations among the youngest and contributing to the influence of our profession. »
Éric Trappier also spoke at the Paris Air Show about "the structuring moment for European industry and the future of Defence Europe in the presence of the President of the Republic and the French, German and Spanish defence ministers. The NGF, a next-generation fighter, an integral part of the Future Air Combat System (Scaf), is on track. A major symbol of Franco-German cooperation, joined by Spain, this programme engages states and industry for many years to come. We have no choice but to succeed. Dassault Aviation and Airbus have reached a major milestone by handing over a joint industrial offer to the French and German governments for the initial demonstration phase of the programme, with the public presentation of models of the new generation fighter and support drones. Let's not forget that behind Dassault Aviation and Airbus, there is also Safran, Thales and tomorrow part of the French supply chain. Of course, german and Spanish supply chains will also be present in the programme. »
The President of Gifas also stressed that the environment has become a central topic for the world of air transport, recalling that "the aviation industry has been committed, for a very long time, to global environmental objectives" and that, today, "every effort is being made to accelerate research and innovation, to move as quickly as possible towards technological disruptions that will drastically reduce the carbon footprint of air transport. , which is not yet won," highlighting the importance of Corac, the Council for Civil Aeronautical Research. He also noted that the group had, at the trade show, strengthened its actions to support the supply chain, notably with the launch of the "Industry of the Future" programme on the digital transformation of the latter, a programme which aims to strengthen the competitiveness of the sector and in particular that of SMEs. He also referred to the new plan to support the attractiveness and training of companions and technicians, "Aero Fab Emploi", which will be launched at the beginning of the new year.
Finally, Éric Trappier wanted to draw attention to the spatial dimension of Gifas' activities, recalling that the French space sector, the leader in Europe, is truly at a critical moment just a few months before the ESA Ministerial Conference.
In conclusion, he wished to recall the role of Gifas, with a membership of 399 companies.