In Ile-de-France, Emitech consolidates its activities on the same site 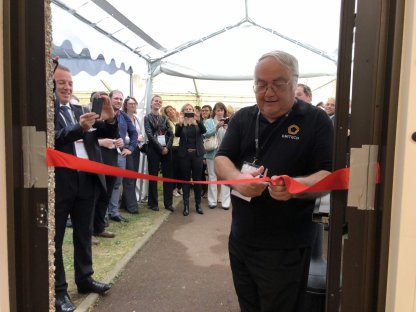 2019 is an eventful year for Emitech. As the group passed its 30th anniversary and acquired a new subsidiary, EMC, earlier this year, it inaugurated, in September, a new 6000 m2 building, "The Three Peoples", in Montigny-le-Bretonneux in the Yvelines, only 400 metres from the historic headquarters "Les Coudriers". It is for Emitech to offer on a single site all the resources to offer a complete service to its customers.
The Emitech expansion project comes about after two years of work and optimization of the group's resources in Ile-de-France. The new "Three Peoples" building brings together testing skills in the areas of equipment safety, radio frequencies, electromagnetic compatibility, climatic and mechanical environments and reliability. Its office part houses the training organization and engineering and project management services. "Les Coudriers" welcomes the aeronautical and defence assets.
"As an example, to offer a global service to the automotive cluster, "The Three Peoples" now brings together the dedicated CEM testing methods and the climatic and mechanical means formerly located in Versailles-Satory. The anchoring in the automotive sector, particularly for sustainable mobility solutions, is underlined by EMC's expertise in powertrains, particularly electric vehicles, and the rise in RF on 5G for autonomous driving," the company said.
This development plan aims to reinvent the Emitech Group's industrial tool to strengthen its coherence. It already applies to the Bourgoin-Jallieu site where its subsidiary Environne'Tech has built and inaugurated in 2018 an extension of 800 m2 to strengthen the local offer offered to nuclear players with in particular new solutions related to earthquakes. It now applies in Ile-de-France.
The company and its seven subsidiaries in France have sixteen sites, or 36,000 m2 of laboratories and offices accredited in CEM, radio, electrical safety, human exposure to electromagnetic fields, fire tests, climate, mechanics, hydraulics, reliability, acoustics and metrological. The Emitech Group specializes in certification (CE marking, trademarks, etc.) and the qualification of equipment and subsets through its three professions: testing, engineering and training. Emitech is a notified organization No. 0536, Cofrac, recognized in more than 60 countries via the OC scheme and specifically in North America (Ised - Canada and FCC accredited - USA) but also in Japan (VCCI Japan).
The group has more than 550 employees. With its forecast revenue of 2019 of 55 million euros, 50% in the automobile, 25% in the air and defence and 25% in the industries and the general public, it reinforces its position of being able to conduct environmental tests in France and Europe.