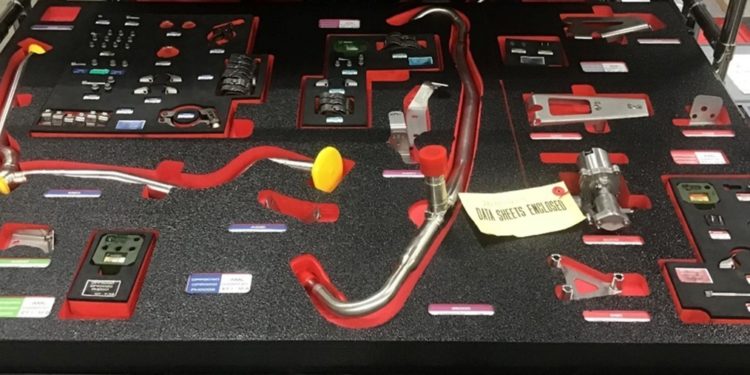 When producing civil and military jet engines, manufacturers in the aviation industry must move a large number of parts and tools daily from the tooling centre to the assembly line located in another building. They must also be able to identify parts throughout the process. In doing so, they must comply with numerous Regulations and Anti-FOD (Foreign Object Damage) regulations and standards. It is at this stage that these giants of the industry use SkinPack.

SkinPack is a French company specializing in high value-added packaging and workspace optimization solutions. An important service that the company offers in particular to companies in the aeronautics sector is the solution of kittingtrays. These highly elaborate part supports are used to transport, protect and optimize production flows for all parts to be mounted in a product, offering concrete answers to FOD and non-quality risk issues.

Recently, Safran Aircraft Engine, a major player in the design, manufacture and maintenance of civil and military aircraft engines, called on SkinPack's expertise in connection with the production of their LEAP-1A engine, the replacement for the CFM-56. This engine, integrated into the A320 / B737 and COMAC aircraft, is produced on an assembly line that must accommodate a production of more than 37 engines per week. The high production rate requires an impeccable organization to the logistics and assembly teams.

After consulting with the Safran Aircraft Engine logistics team, the SkinPack team set up a custom tray design and production process.

This project first had to start with the digitization of each part of the LEAP-1A engine, without exception. To do this, SkinPack has chosen to use the HandySCAN BLACK 3D scanner | Elite of Creaform, because of its accuracy, its rate of measurement, its high resolution and its portability. The measures had to be taken on site, in the premises of Safran Aircraft Engine, without affecting the company's activities.

Once scanned, the files are processed in VXelements,Creaform's 3D data acquisition software. It is with the help of this software that the SkinPack team made various adjustments and other post-processing steps, before exporting them to CAD software.

Once this step was completed, it was now possible to begin the design and ergonomic optimization of the trays themselves, in coordination with the customer's methods and logistics, and then proceed with the validation of 3D visuals.

Finally, the team launched the various stages of production of the trays: SkinPack's specific and patented membrane projection, the high-precision digitally controlled machining of the foams of the trays, and the integration of the identification, de-debunking and counting components.

The kitting trays were then deployed to the tool shop for transfer to the assembly line located in another building 200m away. Four sets of trays had to be delivered each day because each part of the LEAP-1A engine had to be transported using these trays.

In total, this project represented more than 1500 digitized parts in the premises of Safran Aircraft Engine, the production of 36 different trays, sometimes seable, with the exact fingerprints of the engine parts and the integration of all the parts type visseries on removable foams for preparation by another workshop. To date, more than 900 trays have been produced by SkinPack for this project alone.

One step ahead of the competition

The use of the HandySCAN BLACK scanner | Elite for digitization has allowed SkinPack to stand out from the competition. Indeed, the speed of implementation and the high accuracy of data acquired on a wide variety of materials played a crucial role since these measures had to be taken on the spot. In addition, it would have been more complex and time-consuming to obtain the exact footprints of the parts in order to machine the foams accurately, without the digitization of the parts and the creation of a digital library.

The speed of capture and the highly intuitive post-processing operations of the VXelements software have allowed Skinpack to offer a more cost-effective solution in time and money than the competition would have done The digitization of parts also allows SkinPack to carry out an inventory and a digital range for each operation carried out on the engine, a major asset for plant projects of the future.

Oscar Llinares, managing director of SkinPack, says that "the realization of foams in the exact shape could not have been achieved without this technology developed by Creaform", then adds that "the ease of use, deployment and rapid acquisition allow us to have a minor impact on our client's activities during scanning campaigns." He concludes by saying that "the acquisition has become the cornerstone of our entire business. All of our physical and digital solutions cross the acquisition path at some point."

SkinPack, a French company based in Châtellerault, is an innovative player in the field of solutions aimed at the protection and control of parts, the optimization of human flows and operations in aeronautics, aerospace and defense. The company offers services that improve ergonomics through specific parts supports (plateaus, crates, foams) and station layouts, in addition to offering concrete answers to FOD and non-quality risk issues.

SkinPack supports its customers in the ramp-up of the preparation, assembly, dismantling and assembly sectors, thanks to concrete innovations and recognized know-how. The company facilitates the transition to Industry 4.0, with the location of parts and subsets via their media and the integration of virtual and augmented reality in the organization of production means with the realization of assembly ranges in augmented reality

A wireless laser scanner to measure parts in CNC machines

A wireless laser scanner to measure parts in CNC machines