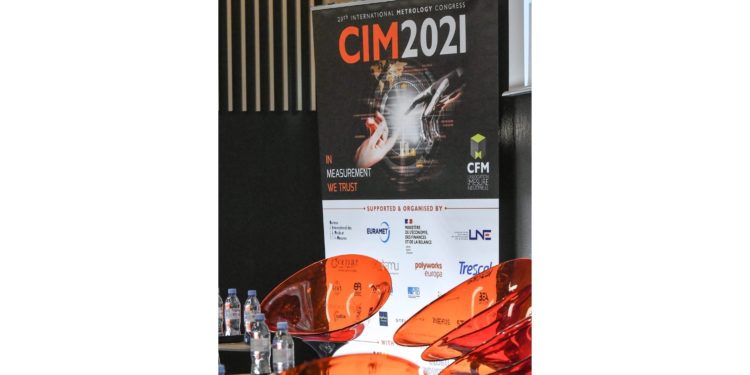 The International Congress of Metrology (CIM) was able to take place in hybrid version, from 7 to 9 September 2021 in Lyon, in exceptional association with Measurement World and Global Industrie.

A tripartite association within the first industrial region of France

Measurement World, Global Industrie and CIM2021 were held simultaneously and formed a winning trio celebrating the return of convivial moments. Spearheads of the national economic recovery, the three events meet the expectations of the French industrial recovery plan. They were held in the heart of Eurexpo in Lyon, a strategic location that allowed the physical participation of several neighboring countries. New location and openings: CIM and Measurement World were able to benefit from the Global Industrie environment, ensure greater media coverage and enrich the range of brands present.

An event expected and adapted to the current situation

The congress registered some 542 participants (including speakers, listeners and exhibitors from the Metrology Village) and had 49 stands in the Metrology Village. "Despite the current context, the CIM remains the unmissable event of the sector. We are proud to announce that 35 countries participated in the congress; 36% of the delegates were from abroad. The congress was animated by 180 conferences and six round tables on measurement R&D and metrology. Twelve hours of the program were broadcast live, say the organizers. The first face-to-face event in our sector, this 20th congress allowed all participants to celebrate the post-Covid reunion. But also to renew contacts, to exchange, to share "real" moments, to have together a clear and positive vision of the future. The enthusiasm and friendliness were indeed palpable! »

An innovative congress that accelerates its transformation

The CIM has taken on the bold challenge of going digital with a hybrid organization, physical or digital. The establishment of a web platform allowed the live broadcast of the six round tables, the plenary session and the NanoWires Project. The pre-recorded oral lectures as well as the posters with video pitch could be viewed. Remote exchanges were possible for three months after the congress.

Another novelty, the activities of the congress were structured around three guiding axes: industry 4.0, health and green deal. This allowed for a better understanding of the implications of each session and the latest developments. Also concerned about ecological issues and its societal responsibilities, the CIM has considerably reduced its environmental impact by moving to zero paper.

Participants' testimonials illustrate the renewal and success of the ICD:

"A first CIM in hybrid that was a real challenge, with a lot of uncertainties, and successful. Technicians on site at the top. The people present really wanted to exchange, and that was very important. »

"The conference was very well organized and gave me a unique opportunity to discover new research and technologies in the field of metrology."

"This was my first trip since March 2020, thank you so much for physically organizing this event."

A guide to shape measurements