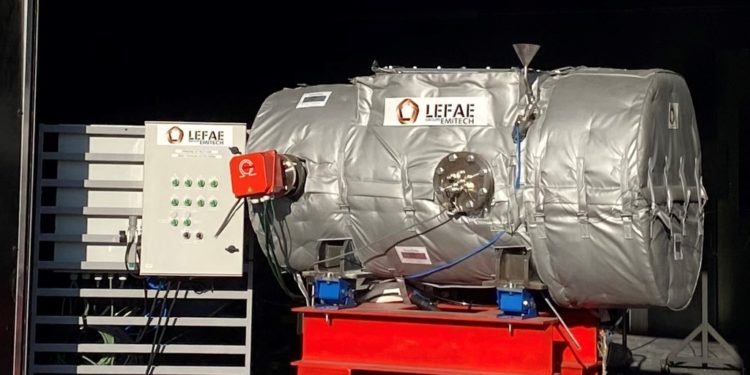 Lefae, established in Saint-Chamond in the Rhône-Alpes region, is the laboratory of the Emitech group specializing in environmental tests with severe constraints, fire tests and combined climatic tests. It has just qualified its new test facility for verifying the conformity of equipment installed in areas with risk of explosion in the presence of hydrocarbon fluids and vapors (equivalent to Atex principles). These explosive conditions are particularly present in the context of aeronautical activities, but also automotive and marine activities.

Lefae's new qualified test bench is intended for testing in explosive atmospheres. These tests specify requirements and procedures for aircraft equipment that may come into contact with flammable fluids and vapors. These are generally associated with fuel installations, for example tanks, pump units, valves, monitoring and control instruments, etc. This type of test also refers to normal and fault conditions that could occur in areas that are or may be subjected to flammable fluids and vapors during flight operations.

The explosive conditions are obtained by producing a stoichiometric air / fuel mixture in proportions sufficient to exceed the lower explosive limit (LEL) of this mixture. These must take into account the nature of the components of this mixture but also the temperature and pressure conditions in which this mixture is formed. Flammable fluids, vapors or test gases mimic those normally used in conventional airplanes and which require oxygen for combustion.

The tests carried out by Lefae comply with the requirements of the Eurocat-ED-14D, RTCA DO-160, MIL-STD-810 standards. They make it possible to evaluate the operation of the equipment tested in an explosive atmosphere without triggering the explosion of the stoichiometric air / fuel mixture. They assess the capacity of the protective enclosures (Atex principle) of the equipment tested to contain an explosion or a flame when the equipment is activated. The characterization of the containment will be demonstrated by the prior insertion and then the triggering of the explosive mixture in the enclosure. They also show temperature rises in circuits or components, for example hydraulic or exhaust systems, intermittent or permanent hot spots, which can cause the mixture to explode.

Lefae performs tests in a real environment and masters all climatic, mechanical, hydraulic, or electrical conditions. The test bench was designed according to the following capacities: the volume of the chamber is 450 dm3, the absolute pressure conditions can reach 12,200 meters above sea level (40,000 feet), temperatures up to 120 ° C (248 ° F. Sealed passages are available on the walls of the test chamber to allow activation or power to the equipment under test such as electrical controls, fluid supply or mechanical activation.

The bench can also be used to explore the behavior of intrinsically explosive products and analyze the toxic gases resulting from their explosion. Lefae, for example, is carrying out studies on thermal runaway in lithium ion cells and batteries. Explosions and fires caused by thermal runaway are analyzed: explosion pressure, fire start-up and analysis of the toxicity threshold of the gases produced during cell or battery failure.

A team of engineers and test laboratory technicians, i.e. around 30 people, support Emitech's customers in carrying out these high-risk tests. The methods and means are implemented in accordance with the requirements of the ISO 17025 standards. The results of the measurements and the associated test reports are drawn up according to the expectations and requirements expressed by the customers and / or the regulatory authorities. Emitech is the only group in France to address all the test sequences in their entirety (climatic, vibratory and explosion). He remains a single point of contact, able to anticipate and manage anomalies.

Non-contact measurement of speed and length