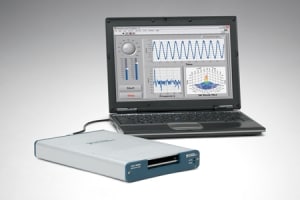 These X-Series USB modules integrate high-performance analog measurement and control channels, counters / timers and digital I / O into a single plug-and-play module, which engineers and scientists can use to a variety of portable test, measurement and data logging applications. These new modules have up to 32 analog inputs, four analog outputs, 48 digital I / O lines and four counters. These eight new modules cover a frequency range from 500 kS / s (on multiplexed analog inputs) to 2 MS / s / channel (on analog inputs with simultaneous sampling).

Like all NI hardware, these modules can be programmed with NI LabVIEW, which makes it easy to develop completely custom test and measurement applications using intuitive, flowchart-style wires and graphical icons. LabVIEW 2010 further simplifies data recording and analysis with a new continuous recording option in the NI DAQ Assistant and the ability to export data from a chart to Microsoft Excel or NI DIAdem for deferred treatment. X-Series USB modules use the same multithreaded NI-DAQmx driver as other National Instruments DAQ devices, making it easy to port LabVIEW code or text-based code from previous applications to X-Series based applications.

X Series USB modules include two essential technologies that make them as powerful as they are easy to use: NI-STC3 technology (unique to the X Series) for advanced timing and synchronization, and NI Signal Streaming for continuous recording of high speed and bidirectional data.

At the heart of all X-Series USB, PCI Express, and PXI Express hardware is NI-STC3 timing and synchronization technology, which coordinates the timing and synchronization of analog, digital, and counting subsystems. This NI-STC3 technology provides X Series modules with independent timing motors for analog and digital I / O subsystems, allowing analog and digital I / O to run independently at different speeds or together through synchronization. X Series modules include four advanced 32-bit counters for frequency, pulse-width modulation (PWM) and encoding operations, as well as a new 100 MHz timebase capable of generating high speeds. 'analog and digital sampling with five times the resolution of previous hardware.

The X-Series USB modules also include patented NI Signal Streaming technology which uses message-based transfers to provide two-way, high-speed data transfer over USB, enabling analog, digital and counting operations. simultaneously. With this technology, simultaneous sampling is now possible on two of the eight new modules, which can sample at a maximum frequency of 1.25 MS / s and 2 MS / s on each of their eight analog inputs. These modules are available with an on-board memory of 32 or 64 MS. to ensure complete acquisitions even in the presence of heavy USB traffic. The high sample rates on all channels make these modules well suited for portable transient recording and ultrasonic testing applications.

Each X Series USB module is characterized by a new completely revised extruded aluminum enclosure. This new enclosure features an easy-access cover to keep the signal wiring secure and shielded. In addition, module-specific pin labels on the cover allow you to quickly determine which screw terminal blocks for a given channel. The enclosure also includes a lockable USB port to prevent accidental extraction during operation.

For specifications, pricing, or to view demonstration videos on the X Series modules, visit www.ni.com/xseries/usb.

Aquilon: the scanner that pushes the limits of 3D digitization

Member of micronora's board for more than 20 years, Michel Froelicher was the organizer of Zoom, Micronora's flagship animation that revealed dozens of innovations in the field of...