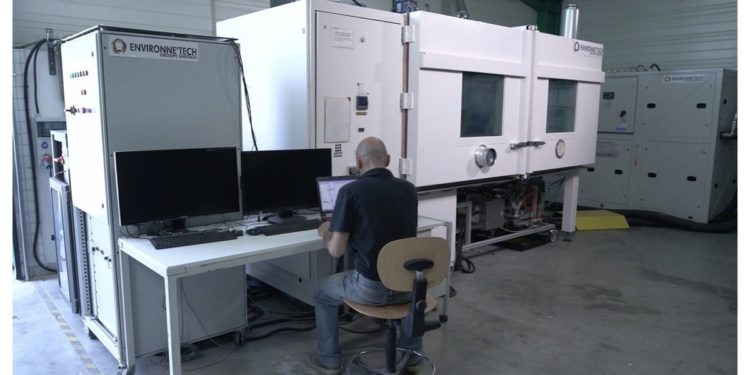 The Emitech group offers a variety and quantity of test facilities unique in France, constantly evolving, in order to support its customers' innovations, particularly towards electric mobility. The group already has important testing facilities in this field such as the EMCEM installation, which aims to characterize an electric vehicle motor from the point of view of electromagnetic compatibility (EMC) but also benches for high-voltage batteries (HV), power electronics, computers, etc. It announces new equipment for tests in the field of hydrogen (fuel cells, tanks + valves). The deployment of the hydrogen sector by different regions in France is a strong axis of the energy transition.

Hydrogen fuel cell testing requires complex installations that incorporate a large number of easements. These must be secured because hydrogen (H2) is a potentially explosive gas when it reaches a concentration of 4% in the air. In addition, a power equivalent to 50% of the electricity production of the hydrogen fuel cell is also dissipated in the form of heat. This is why Emitech, after selecting a hydrogen supplier and installing power systems, had to adapt its laboratories to secure its facilities with sensors and equip them with cooling units.

The Emitech Group now has two laboratories in France adapted to receive all types of equipment, including high-power hydrogen fuel cells. A third laboratory installation is also in preparation.

The EMC and electrical testing laboratory of Chassieu (69) has a semi-anechoic Faraday cage of 70m² (H>5m) with servitudes dedicated to hydrogen: an H2 supply plant connected to 4 V18 racks of bottles (4x158m3 of H2 compressed at 200 bar / 15°C), hydrogen detection sensors, an ATEX extractor hood for possible vapors and 45kW of cooling group.

In the mechanical and climatic testing laboratory of Environne'Tech in Bourgoin Jallieu (38), the climatic chamber has been fully adapted and secured to receive a complete fuel cell system with an H2 supply plant connected to 2 V18 racks of cylinders (H2 compressed to 200 bar at 15 ° C) and detection sensors.

The Lefae mechanical and climatic testing laboratory in Saint-Chamond (42), with a unique competence in fire tests as well as the ability to test tanks (hydraulic and pneumatic tests: endurance, pressure resistance, bursting, drilling, impacts, overload), is being adapted to eventually become a test center for type IV H2 tanks.

Emitech is currently supporting one of the hydrogen leaders in France and Europe, as part of a project for commercial vehicles powered by hydrogen fuel cells.

The OEM provides the manufacturer with the electric energy, a fuel cell, to be integrated into a conventional electric vehicle architecture. It is a complete and complex system that includes cooling machinery as well as humidity regulators, air compression, etc. In addition, the battery is accompanied by a high-voltage battery for transient power needs such as acceleration as well as for storing energy recovery, especially during braking.

The system is tested in CEM, climatic, mechanical and vibration in Emitech laboratories according to the specifications of the car manufacturer involved in this project. Emitech is the only one in France to offer these campaigns.

Emitech was able to adapt its laboratories in a few months to meet its customer in the field of hydrogen and conduct these tests. Tests began in autumn 2020 in mechanics and climate and then in January 2021 for the CEM. Further campaigns are already planned and foreign customers have already expressed interest in these facilities. In order to support the development of the sector and the ramp-up of the "fuel cell" base bricks of the various equipment manufacturers, laboratory evolution work is already planned in 2022 to make it possible to carry out tests on 100kW batteries.

Emitech has become a member of two major hydrogen networks in France. It belongs to the general circle H2 within the Neopolia network, which brings together more than 250 companies mainly from the Pays de la Loire region. Emitech has also been a member of France Hydrogen since 2021, an association that brings together the actors (more than 400) of hydrogen and fuel cells in France.

At the same time, Emitech carries out active normative monitoring in order to continuously develop its resources and adapt them to the future needs of its customers. This is the case, for example, for the use of hydrogen in ports, whether for use in recreational boating or for long-term merchant shipping.

Emitech is also referenced in the "guide for the conformity assessment and certification of hydrogen systems", a reference document on the subject published in July 2021 written by Ineris (National Institute for the Industrial Environment and Risks) on request on behalf of Ademe (Environment and Energy Management Agency) and France Hydrogen.