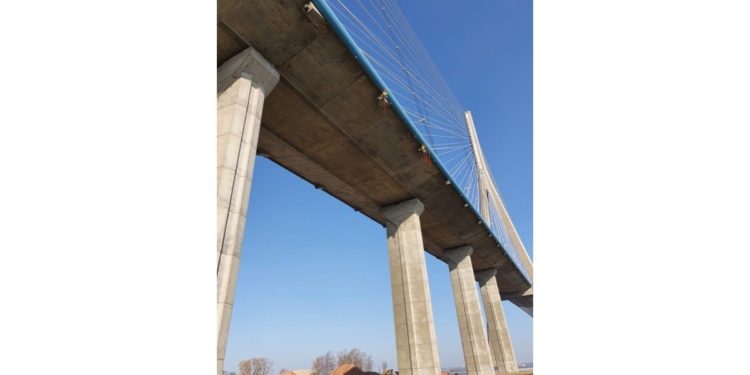 Watch our video and discover the work done by our teams to ensure the detection of any potential wire break on the Normandy Bridge...

A detailed version of the video is available. Watch it by clicking HERE.

Determine in real time where and when a wire break occurs on the structure...

The Normandy Bridge monitoring project began at the end of 2019. The Seine Estuaire Chamber of Commerce and Territorial Industry (CCI TSE) has mandated the MISTRAS group to set up a permanent and real-time monitoring solution on the structure.

After more than 25 years of service, the Pont de Normandie, equipped with 184 guy stays and famous throughout the world for its unique architecture, has already undergone the renovation of several of its stays in the past. However, the solutions put in place did not make it possible to effectively identify the stays to be repaired in real time.

This is how the Seine Estuaire Chamber of Commerce and Territorial Industry (CCI TSE) turned to the MISTRAS group, one of the world leaders in Non-Destructive Testing (NDT) and precursor of acoustic emission (EA)technology, the most effective to provide a concrete answer to this problem.

By identifying and locatorizing damage within materials, this technology makes it possible to measure where and when a wire break occurs throughout the structure. Thanks to the monitoring by Acoustic Emission, the customer is alerted in real time,in case of discovery of an anomaly and can thus take the necessary operational decisions.

Installation of several robust data logs, several hundred Acoustic Emission sensors distributed according to a strategic mesh and connected by several tens of kilometers of cable...

The first consisted of a feasibility study conducted by the MISTRAS Research and Development team on a representative part of the bridge (several voussoirs and several stays), in order to ensure the ability of the technique to detect possible wire breaks, optimize the choice of equipment and its distribution on the structure as well as study the means of access to generalize the instrumentation to the entire bridge.

With an average of 20,000 motorists using it every day, the environment of the Normandy Bridge is noisy since the bridge is very busy. This study therefore played a key role in the project because it was a question of ensuring that the technology rejected these environmental noises due to the importance of traffic on the bridge and weather conditions that were not always favorable.

In the second stage, the MISTRAS teams installed the Acoustic Emission (EA) listening device on all the stays and prestressing cables, both inside and outside the bridge. To do so, the group had to call on its teams of IRATA authorized rope workers.

In total, the MISTRAS teams installed multiple EA power plants representing nearly 700 channels and nearly 700 EA sensors inside and outside the structure according to a strategic mesh and connected by several tens of kilometers of cable. All MISTRAS equipment installed meets the standards required by the CCI TSE.

MISTRAS' telecommunications equipment then made it possible to collect a large amount of data from the French head office located in Sucy-en-Brie (94) as soon as the first installations were set up. The on-site engineers, supported by authorized COFREND Level III personnel, processed the data and approved the results.

MISTRAS: A major player in the monitoring of engineering structures

This project shows that the MISTRAS group, thanks to its experience in Civil Engineering since the 1980s, particularly in England,has a lot to contribute to this sector. Indeed, the group has been able to deploy significant resources on this project, whether on the financial, material or human level with the mobilization of teams with extremely diversified skills (technical and R&D department, qualified technicians on site and in the workshop, IRATA authorized rope technicians...).

In particular, it benefits from a solid asset: the design and manufacture of its own EA systems,which allows it to be able to adapt the systems to the different scenarios and problems encountered. This is how the group was able to deploy a complete monitoring system on a structure as complex as the Normandy Bridge.

MISTRAS is also an international group, which knows how to take advantage of the coordination between its different entities worldwide to carry out the major projects entrusted to it. On the Normandy Bridge project, our MISTRAS colleagues based in the United Kingdom and the United States helped France and contributed to the success of this project.