Development of a test bench in liquid nanoflowmetry 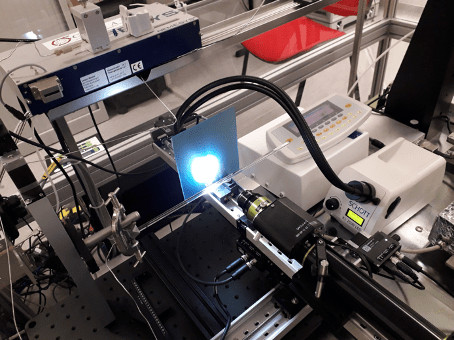 The Cetiat (Technical Center of Aeraulic and Thermal Industries) extends its expertise in the field of liquid flowmetry for which it is Cofrac accredited.

As part of the European project MeDD2 ( Metrology for Drug Delivery , successor to the previous project aimed at improving the reliability of drug administration) and a thesis conducted in collaboration with the Gulliver research unit of the Pierre Gilles Institute in Gennes, the technical center has developed a new bench at the nano-flow scale. This test bench, based on an optical method and composed of a high-resolution, high-speed camera associated with an image processing algorithm, allows flow rates up to 1 nl.min-1 to be measured, i.e. approximately one drop per month.

Thus, it is possible to carry out measurements at very low flow rates for micro and nanofluidics applications, such as laboratories on chips (a miniaturized device which integrates within a single chip one or several analyzes which are commonly carried out in the laboratory ). In this category, there are some Covid-19 screening tests. It can also calibrate medical devices, such as infusion pumps, insulin pumps, etc. on the total range of use in terms of volumes and flow rates and in accordance with the latest European and international directives.

Overdosing or underdosing the drugs can have serious consequences for the patient. Controlling very low flow rates precisely and ensuring their stability is critical to delivering the correct amount of medication. Diabetics and premature babies, for example, need the greatest precision in knowing the dose delivered to them.

It is funded to the tune of € 180k (including € 50k for equipment and € 120k for R&D) by French metrology - led by LNE, the National Testing and Metrology Laboratory - and the European Union in within the framework of the Euramet Empir program which supports European research projects in metrology.